This is part Two. Part one is here.

Not copyrighted by Paramount.

Better known as the Alcubierre Drive, because Paramount can’t sue you for that. This gets a lot of press because there is some experimental, and a lot of mathematical validity to it, and because it seems a lot like Star Trek.

It’s not Star Trek Warp Drive, but that is a deep deep nerd discussion beyond this article. It has the same practical effect.

The Alcubbierre Drive creates a bubble around the vehicle that slips through space-time at hyper-luminal velocities from the point of view of a stationary observer. The ship doesn’t move; the bubble does all the moving. 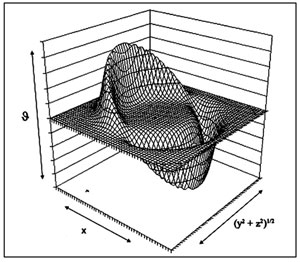 Seriously, there is real math behind this.

Like the wormholes, creating such a bubble requires “exotic matter” in this case matter possessing negative energy density. There is a measurable quantum dynamic in a vacuum between two plates called the Casimir effect that demonstrates the distant possibility of such matter. But there’s a lot of steps between weird measurements in a lab, and a bubble of space-time around your shiny spaceship.

There are, actually, a lot of variants on this theme.

The Tau Zero Foundation keeps track of such things:

Warp drive and wormholes are two examples which rely on known solutions to the equations of General Relativity, but other concepts have been proposed that are much more speculative. A short list – Diametric, Bias, Disjunction and Pitch Drives, all of which involve creating a gradient in space-time that is mobile.

Anyway, You make a magic bubble around the ship – somehow- and it moves, and the ship rides along inside of it. And because this bubble isn’t really part of the regular universe, it can go FTL without making Einstein cringe.

Can you engage the rest of the universe while inside your warped bubble? This happened all the time in early Star Trek – but that gets into the deeper nerd-hole that we don’t have time for.

Most plausibly – no. You are either in the bubble or out of the bubble – just like more recent Star Trek offerings would suggest.

But you don’t need no stinking gate. You don’t really even need a propulsion system (though you likely have one for when you turn the bubble off. You plot a course and make it so.

A starship I made up using a drive I made up.

Full disclosure, I made this up for my own fiction, and it is not based at all on popular or plausible FTL methods. The Tau Zero folks might call this a Bias Drive.

Using a configuration of powerful gravitic forces such as singularities (at the primitive stages) to gravitic generators, space/time is condensed or “warped” to the fore of the vehicle and left to expand to “normal” shape to the aft of the vehicle. The effect is a multiple of the vehicles regular velocity that is unrestricted by the lightspeed barrier.

Artificial singularities, kept in stasis fields, anchored to the side of the ship. What could go wrong?

This is not an Alcubierre Drive. That method is less insane.

The ship requires some propulsion other than the gravitic lens, which distorts spacetime around the ship, but does not, by itself, move or cause movement.

Using the gravity lens technique keeps the vehicle in “normal” space, and can therefore collide with other objects, so using it inside areas with substantial mass densities (such as star systems) is suicidal. The vehicle is further subject to any time dilation associated with high velocity travel. Also, any malfunction could cause the gravitic lens to collapse in on itself, imploding the ship down to the subatomic level.

You must plot straight lines. You cannot turn these things.

Humans are the only race known to employ this method beyond the experimental level. All other races consider it far too dangerous, not just for the users, but it appears to scar spacetime itself.

When They stopped us, they said, “We are not certain which frightens us more: that fact that you thought of this, or the fact that you used it.”

Even after it was outlawed, humans kept a few of these around, because of course we did.

Because development was halted early, and perhaps because of real technical barriers, Humans never gained any speed faster than 240% lightspeed with this method. That’s still more almost two years to the nearest star.