The 11th season of the the revived Doctor Who changed just about everything, show-runner, cast, and focus. And while it’s more popular than ever (this is true, haters) I still have some problems with it.

But those problems may not be what you think.

We’re halfway through the season and I’m finally forming thoughts about this? Yes. Sometimes it worth it just to shut up and watch. After all, they blew up the old team and rebuilt, and we know they are going to take a few episodes to find a groove.

I just turned off from episode 6, and while some of the things that bothered me from Episode 1 have evaporated, a few remain.

It is important to remember that I have always liked this show, and I still like it. What follows should be taken as friendly advice.

Talk softly and wave around a sonic screwdriver

I have to turn on Closed Captioning to watch this show.

Let me preface this by noting that I enjoy Jodie Whittaker as an actress, and generally her portrayal of the Doctor so far. A new Doctor always faces into fierce winds, even without the gender issues. But I cannot understand a third of what she says.

Whittaker’s Yorkshire accent is thicker, to American ears, than any of her predecessors. That, however, I could likely acclimate to. Her real problem is volume.

All of her predecessors, except maybe Peter Davidson, had solid baritone voices that could boom through the chaos when required. Whittaker’s thin alto can’t get there, and worse, she tends to mumble when her previous incarnations might have shouted.

She’s not the first Doctor to mumble, but she has yet to shout (other than “Run!” or the like) in a way that commands the room. Maybe that’s not in this incarnation. The 5th was not much of a yeller either, except when he was trying to get the attention of his assorted quarreling companions. Which bring us to…

Aren’t we all so interesting…

As the Days of the the Companions Turn

Friends! They’re called friends now. Because companion has become a loaded word? OK. In truth, the Master was right all along – they are really more like pets. That’s not my problem, though.

The 12th (actually 15th) Doctor has more than two companions for the first time in the modern era. And they are all well portrayed, reasonably fleshed out, real people from Sheffield with different perspectives on life, the universe and travelling with a madwoman in a box.

And let’s be clear, this is an improvement over the different incarnations of Mary Sue [yes – even Jenna Coleman’s Clara] the good Doctor has been not-really-dating over the past ten seasons. Notable that the least Mary-Sue of them, Donna Noble, is easily the most popular companion, especially among women.

Let’s be clear about something else: I generally like all these new friends, and the actors who portray them. They come across as real people in a way this series rarely gets.

In establishing these characters – who all knew each other prior to stumbling onto the Doctor in Episode one – the teeters at the edge of sliding into soap-opera about their lives.

It is a mark of the new Who that all the companions have been relatively normal humans from contemporary Earth. And they come home at the end of every story arc and resume their lives in and around their time in the TARDIS.

In the old series they came from all over the place, and rarely saw home again until their time-travelling was at an end (usually meaning when the actor quit). I personally see that as kind of a loss.

There are any number of shows that deal with the stress adventuring and the absences it requires puts upon the lives of well meaning people and their families. Namely, every show of any quality that deals with cops or special agents of whatever sort bounces this theme around. That often makes for compelling drama.

But that is not why we watch Doctor Who.

It has been my experience that the less time the Doctor spends in contemporary England, the better the show. The whole point of Doctor Who is getting away from the here and now and playing with possibilities and situations a realistic show about armed agents cannot touch.

We can’t do that if we spend significant parts of the show keeping up with the gang in Sheffield.

I am Tzim-Sha! Totally different than a bush-league Cyberman!

She has yet to face a serious villain

The new show-runners seem determined not to trot out the old rogues gallery of villains. They want their new Doctor to face some new enemies. Good for them.

Thus far, though all the enemies she has faced have either been one-dimensional (trophy hunter from space, racist asshole from the far future) or turned out to be good or neutral parties that have been misunderstood.

The new Doctor is quieter – and not just her voice. She doesn’t have the trash talking swagger of the boys before her. She doesn’t rely on her legend either. This is not a good woman who goes to war.

This Doctor has mainly defeated her opponents by stealing their equipment and altering it so that it backfires on them. She is a klepto who excels at sabotage.

The softer approach is not the complaint here. It is the softer villains.

Now, the first episode of a new Doctor usually has a disposable villain. But they have yet to top the interstellar trophy hunter [from Ep 1] who sticks teeth in its skin. Seriously, the most menacing foe they faced so far were the racist cops in 1950’s Alabama. 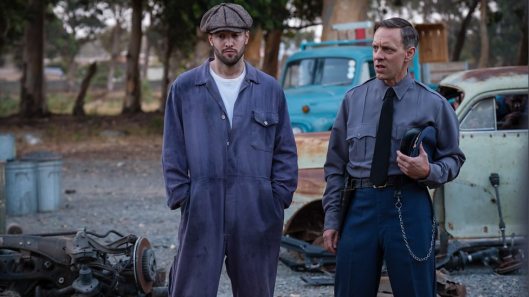 One of these men is an escaped criminal from the far future. The other is actually menacing and dangerous.

[Sidebar: A racist from the future? That’s the best they could do? There were plenty of local racists to make that point for them. The main villain should have had some other unrelated motivation. Future Nazi came across more as lazy and heavy-handed than well-intentioned and relevant.]

So more time at the edge of the universe facing more fearsome foes over higher stakes, and less time worrying about making Nan’s birthday whatever in Sheffield. I suspect I am just going to have to accept the Closed Captioning.