This is 3rd in the series. The first part, which explains our premise, can be found here.

The same Star Wars graphic everyone else uses…

If what follows seems less scientifically documented, that’s because it is.  We start scraping against fantasy past here.
Hyperspace Shunt

Many FTL schemes envision an alternate dimension within or adjacent to our own through which vehicles might pass through to arrive somewhere else in the universe in a much shorter time. This is your classic hyperspace. This is how ships move about in Star Wars and Traveler.

There is, to my understanding, no functional difference between Hyperspace and the Ethereal Plane of Dungeons and Dragons and all its derivatives. So Star Finder GM’s take note. 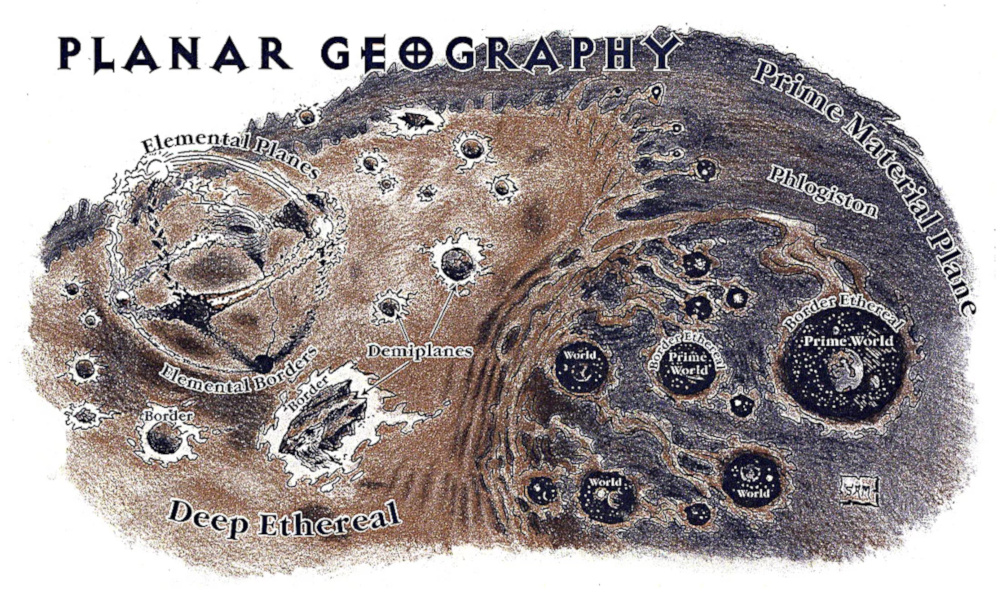 Hyperspace from a Liberal Arts perspective

The Hyperdrive (or Jump Drive or whatever) is whatever gizmo you use to port your shiny ship into Hyperspace. It may or may not be integral with your regular propulsion. Once in Hyperspace, how long you stay may be a function of how far you plan to travel, or a function of the plot.

The RPG Traveler takes the position that you always spend the same amount of time in “Jumpspace”  – 150 hours – regardless of how far you jump. This seems like a compromise decision made by a committee in order to move on to the next thing.

How to enter the Ethereal Plane with “science”

The functional difference between hyperspace and Wormholes is mobility. The ships effectively make their own entrances and exits as they go. If they have to travel to fixed and charted jump-points you have wormhole with different architecture.

Like Warp Bubbles, you are either in the universe or you are outside of it. In my version of this, the big difference between hyperspace and simple extra-dimensional shunting is the possibility of encounters; strange and dangerous encounters.

Unlike instantaneous jump drives (which we get to below) there is some travel time to be idled away on character development or whatever within hyperspace. This – for me – is what defines the approach.

Time spent in hyperspace in most fiction or  generally tracks along with the passage of time in the regular universe. Meaning 150 hours ship time is 150 hours regular universe time. This does not need to be the case, however. You could still roll two sets of dice: one for subjective time in Hyperspace and one for objective time that passed in the actual universe.

The random time approach is as much in line with known physics as anything else about hyperspace – meaning none of it. It has as much scientific validity as the Ethereal Plane.

Among the many tropes that E.E. “Doc” Smith concocted for his Lensmen series was the Inertialess Drive. (Reasonably good summary of its first appearance here]. Applied gravitics cancel out the inertia quality of the mass. Then , assuming you start outside of a gravity well, there is nothing that will affect the speed of the mass except friction, which is negligible in outer space.

If you’re so advanced, how come your spaceship looks like a used Russian submarine?

By wiping out inertia and gravity you can ignore Einstein’s speed limit and go as fast as you can project yourself with your hand-wavium projector. You can’t use a thruster- or anything like that. Those rely on inertia.

You can make a case that you ignore the time-dilation effects as well, but many authors have had good fun claiming the opposite.

This assumes technological control of Gravitics, afterwards this is the next big leap.

If you want a ship that goes really fast (Doc Smith wrote about parsecs per hour) but stays in the universe, this is it.

Jump Drives use this theory, or something equally absurd, to effectively teleport the ship, instantaneously, to another part of the universe.

[Maybe I should note hear that the Traveler “Jump drive” is a hypserspace drive as we discussed above. Nothing in the canon Traveler universe does anything like this.]

There is often some exotic resource required, some range limitations, and some time required to start (or spool -up as the new Battlestar Galactica would say) the jump. But the transport itself is instantaneous.

In my fiction, you have to find a way to change the vibrations of every single particle in the mass to be moved. Moving in just space, that resonance change can be permanent, assuming you do not collide with existing mass upon arrival.  If you add time to the space equation, (or space to the time equation) the resonance shift is inherently unstable, and you will eventually snap back to your original harmonics.

How long will that take? Let me roll some dice…

With the three methods above, there are no choke points to concentrate your defenses on; an enemy could pop out of nowhere at any time. (OK – you might see Inertialess Drive coming – as they slow down). You can bop around the galaxy or even farther in the time it takes to clear the shipping dock.

I have a bookshelf full of RPG’s many of them space-opera. I sometimes imagine a sprawling space opera setting where all of the above are possible, depending on where you go, and who you go with. Because none of these schemes actually prohibit the other schemes. There is a (fictional) universe where they are all viable.

That’s a whole different series of posts though. Watch this space.